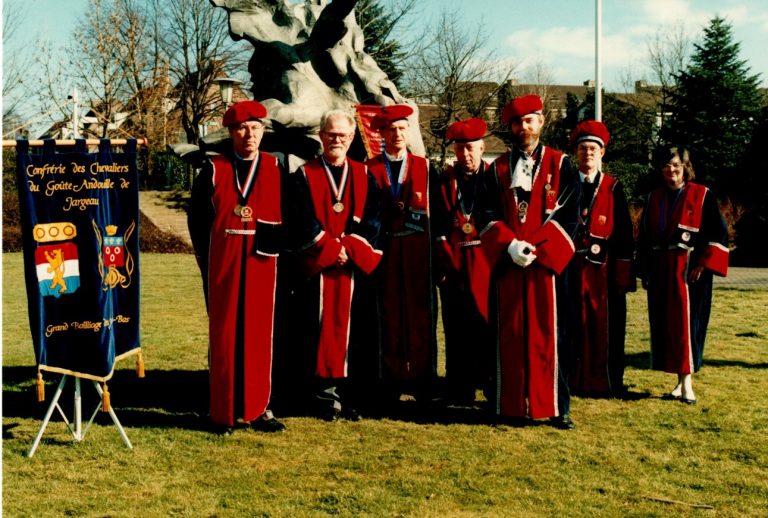 The confrérie (which stands for brotherhood) originates from Jargeau. Jargeau is a small picturesque French village located on the banks of the Loire. This village became famous because of a sausage called 'Andouille'. An andouille is a typical French sausage with as main ingredient, do not be scared, rumen.

With the aim of improving the reputation and quality of the Andouille, in 1970 the French Chamber of Commerce, together with a number of independent gastronomes, founded the confrérie. The initiative to found this brotherhood was actually a bit of a confrerie for another sausage called the 'Boudin' (large white sausages) from 'Montagne' and 'Paris', which already had a memorable membership of 2500 knights

The confrerie in Jargeau was limited to a number of meetings a year while enjoying a good glass of wine and eating that tasty Andouille. At a certain moment this product was also wanted to be promoted abroad and in 1981 the Dutch subsidiary called 'Grand-Bailliage des Pays-Bas' was born.

This Dutch department started to organize competitions for traditional butchers. Outside the Andouille, however, even more raw and preserved sausages were admitted to this professional competition, such as ox sausage, farmers' sausage, salami, etc. In 1989 they started inspecting raw or dried hams.

So in these nine different categories of products everyone can participate who declares under parole that he / she has made the product himself. Our total membership counts 4,500 members from around the world.

In 2017, the Dutch brotherhood of the Confrérie has changed drastically. New board members and a new approach with even more attention to craftsmanship.